By August 7th, 2018Speakers
No Comments 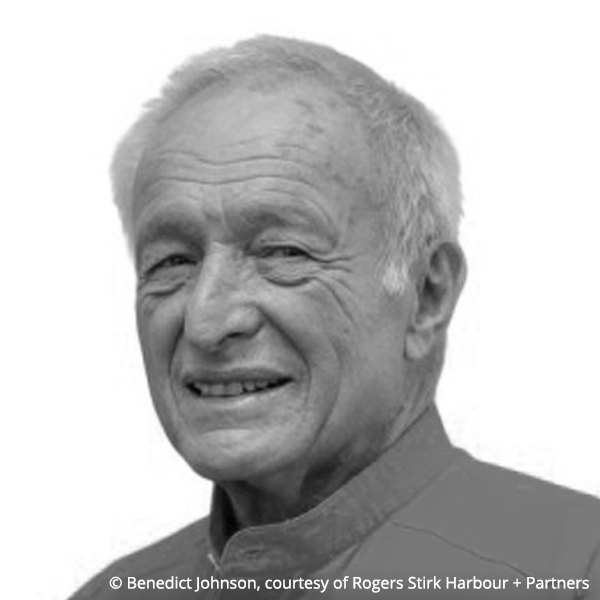 Richard Rogers is the 2007 Pritzker Architecture Prize Laureate, the recipient of the RIBA Gold Medal in 1985 and winner of the 1999 Thomas Jefferson Memorial Foundation Medal. Richard was awarded the Légion d’Honneur in 1986, knighted in 1991 and made a member of the House of Lords in 1996. In 2008 he was made a Member of the Order of the Companions of Honour.

In 1995, he was the first architect invited to give the BBC Reith Lectures – a series entitled ‘Cities for a Small Planet’. In 1998 he chaired the UK Government’s Urban Task Force. Its highly influential report, “Towards an Urban Renaissance”, was the first government report to advocate a reuse of city centres and derelict land.

During 1980s and 90s, Richard was an advisor to President Mitterand’s Grands Projets programme in Paris, and from 2000 – 03 he advised the Mayor of Barcelona’s Urban Strategies Council. From 2001 to 2008 he was chief advisor on Architecture and Urbanism to the first Mayor of London, Ken Livingstone.

Richard has a wealth of experience in urban masterplanning, with major schemes in London, Berlin, Florence, New York, Shanghai Pudong and Sydney. He also participated in the Greater Paris project, which looks at the future of the city as a more integrated metropolitan region.

He understands that cities are made by the people that live in them, not by the buildings themselves, and it is the life between buildings that is important, “Cities are a stage where people perform and buildings are the sets that frame the performance. A place for all”.